These are the topics covered by this page:

Our multilayer products can be used at cryogenic temperatures and have been demonstrated down to 4mK. For these applications a specific preparation (wires, adhesive etc.) is required.

Read about your possibilites for ultra-high vacuum

The last point means, that at low temperatures a piezoelectric actuator becomes extremely stable against electrical depoling. Therefore, a much wider bipolar operation compared to room temperature is possible. Thereby, the loss in stroke for low temperature can be partially compensated for.

Below is an example of cryogenic measurements at two different temperatures showing the relationship between stroke and voltage. As it can be seen, the strain at 77 K is approximately reduced to half the value at room temperature. Due to the strong increase of the coercive field, it can also be observed that the actuator exhibits a fairly linear voltage-displacement characteristic at negative voltage. The piezoelectric actuator becomes extremely stable against electrical depoling and the loss in stroke at low temperature can be partially compensated by using a wide bipolar operation. 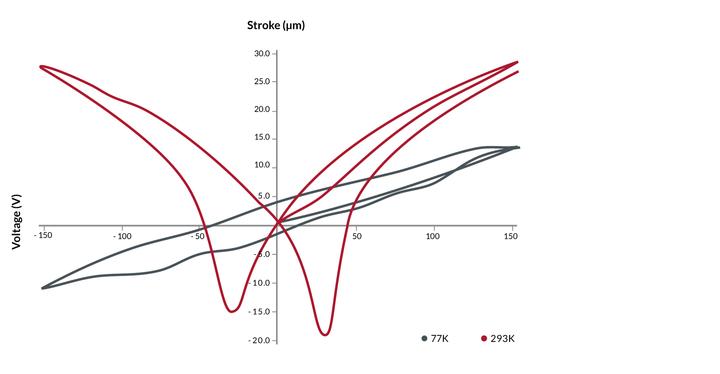 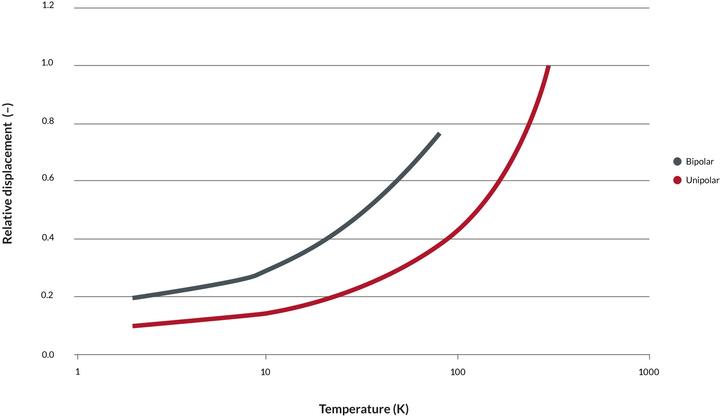 The evolution of maximum displacement vs. temperature for NCE57

Our free 1.5 hour webinars follow the same structure as our tutorials.